Welcome to The Center for Communally Bonded Research
(CCBR) 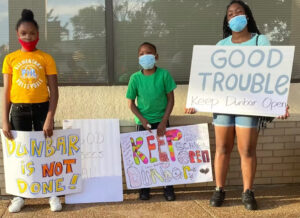 Residents of the St. Louis neighborhood known as The Ville have been fighting for years to stop the closing of Charles H. Sumner High School, the oldest historically Black high school west of the Mississippi River.

Sumner High School has been under repeated threats of closure from the school board and the superintendent, who cite declining enrollment. The most recent such threat arose in December 2020.